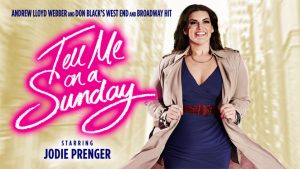 Although I am in no way a fan of Andrew Lloyd Webber musicals, as an English girl who loves the 1980s and (before meeting my boyfriend) endured years as a single girl “Tell Me on Sunday” has always appealed to me, and with my first ever visit to New York earlier this month, this desire to see it has grown, which is why I was delighted to find myself in the audience at the Winding Wheel, Chesterfield yesterday evening.

Of course the other appeal of this one woman show is actress and singer Jodie Prenger in the lead role, a talented female who won hearts all over the country when she won the role of Nancy in Oliver on the BBC’s “I’ll Do Anything” and hasn’t stopped since, from playing the lead in “Calamity Jane” to supporting Paul O’Grady on his Radio 2 show and featuring in one of my favourite 00s dramas “Hustle”.

For those of you not familiar with it, the song charts the romantic misadventures of Emma, a young English women in the Big Apple in my favourite decade (the 1980s). Brimming with optimism and seeking love and success, she weaves her way through the maze of the city only for her anxieties, frustrations and heartaches leading her to wonder whether she has been looking for love in all the wrong places (something us girls have all experienced).

Written by composer Andrew Lloyd Webber and lyricist Don Black, the show features breathtaking songs including the title track and “Take that look off your face”. Thanks also needs to be given to the show’s cast and crew, including the amazing live band, and the staff of the Winding Wheel.

Along with the two most well known tracks stand-out songs for me including the positive anthem “Dreams never run on time”, the jazzy “Shelton Bloom” and as a romantic in love with my toy boy boyfriend “It’s not the end of the world (if he’s younger)” and the “Last man in my life”. I also loved the comic contents of the first letters home to England.

Jodie’s stunning voice made me well up from the first song as she spoke rarely a word and instead sung her way through 24 songs in an hour, with only a few quick costume changes, against a beautiful set of a late 70s/early 80s New York apartment in front of a miniature lit New York skyline (thanks to David Woodhouse and Howard Hudson) hiding the very talented band.

The show left me with great respect and love for Jodie and her outstanding singing and acting talent and praying that her character Emma meets someone who loves her for who she is.

After the interval Jodie came back on stage, accompanied by a pianist, to sing “Secret Love” from her recent tour of “Calamity Jane” and her two favourite Andrew Lloyd Webber tracks, including a duet with her talented understudy Jodie Beth Meyer, in between answering audience questions (forgot to ask my own of what she hopes would happen to Emma in the future) and coming across as a genuine, lovely and hilarious woman, the type of woman all women should be.

From today the jammed pack tour of the show continues with so many venues that one is bound to be near you, including: