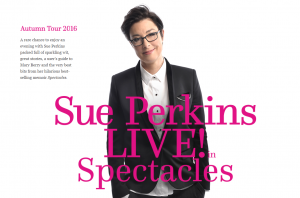 I love the fact that for the second year running I have had the chance to be in a live audience with one of my female role models, tonight with the brilliant Sue Perkins at the Lyceum Theatre in Sheffield, who most people know best as co-host of the “Great British Bake Off” with her comedy partner in crime Mel, but for me someone i have had a (straight) girl crush on since my student television viewing of “Light Lunch” and “Late Lunch” through my desire to share many a table and era of food with (alongside Giles Coren) on “Supersizers”,  her 2013 sitcom “Heading Out”, which unlike other critics I thought was hilarious, well written and well cast, to everything quizzical and baked in between.

The evening promised a rare opportunity to enjoy an evening with Sue (one of only 14 nights of her tour), packed full of sparkling wit, great stories, a user guide to Mary Berry and the best bits from her hilarious best selling memoir “Spectacles” (I read the hardback on a coach journey last year and would describe every part of it as the best bits so glad it was Sue and not me who had to decide).

As part of the ticket myself and everyone else in the packed audience also got a paperback copy of the book (you can never have too many copies of a good book and did mean I could meet her after the show to get my copy signed) published by Penguin.

To an audience full of a surprising number of people rocking her trademark hair, glasses and blazer combo, Sue Perkins started the evening making sure we knew she was not Mel and summarising what actually happens in a certain tent, before entertaining us with tales and photographs from her childhood, including not being able to tell the difference between big cats and vans, before opening the floor to questions (glad someone asking my “Supersizers” one) and a singalong to a re-written version of the number one from the day Sue was born).

One of the things I loved most about “Spectacles” when I read it last year was that you could hear Sue Perkin’s voice in your head when you read it, so having her read and perform extracts out loud brought it to a brilliantly hilarious new level, which when combined with her natural stage presence, comedy and audience interaction, including clever use of a slide show made for an outstanding evening, especially as i was near the front of a huge queue to meet her afterwards. And although part of me would have loved to have been there to see Mel heckle her from the balcony in Kingston, a larger chunk of me was delighted that we had Sue all to ourselves.

There are only eleven nights left to see Sue Perkins live (at least one of which is completely sold out* and three of which clash with a certain baking competition so you may need to catch up on i-player and avoid social media**), so if you are a fan (and I’ve never met anyone who isn’t) don’t miss out seeing her on: