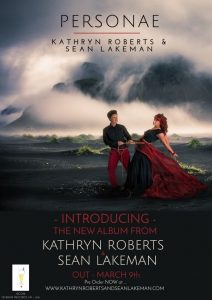 One of my favourite acts I saw perform live (twice) last year and twice winners of Best Duo at the BBC Folk Awards are Kathryn Roberts and Sean Lakeman, so I was delighted when they agreed to be interviewed ahead of the release of their new album Personae on 9 March and their forthcoming tour to promote the album.

Me: For those who haven’t come across you before, what do people need to know about Kathryn Roberts and Sean Lakeman?

Kathryn and Sean: As part of the wider Lakeman clan – synonymous with modern British folk music, we have carved out a career as a popular duo on the folk scene. We mix traditional song alongside our own self-penned material.

Me: What can we expect from your new album Personae?

Kathryn and Sean: We have recorded a collection of character based songs that we feel tell stories and provide a varied and eclectic listening experience. Much like our own personalities.

Kathryn: I’d loved to have sung a duet with Lowell George, the late singer of the group Little Feat.

Sean: I’d love to work with Larry Campbell. A Woodstock based American multi-instrumentalist who I have admired for years.

Me: What’s the best thing about performing with your other half and, dare I ask, the worse?

Kathyrn and Sean: The best thing is that you get to hang out with your best mate all the time and share some unique and wonderful experiences together. The worst thing is collectively missing the kids when we are on the road for a long time.

Me: One of my favourite songs of yours, which I’m delighted is on your new album, is “The Poison Club” but what is your favourite poison and why?

Kathryn : Brandy, because it reminds me of some holidays in Kent where I would have Brandy in a mid-morning coffee every day.

Sean : Arsenic. Because our local town Tavistock was built on the minerals boom which included the mining of Arsenic. Quite prosperous in its day.

Me: Were you surprised at how much “A Song to Live By” connected with audiences and when you wrote it did you ever imagine one day its’ lyrics would be on a greeting card?

Kathryn: I was reassured to know that other people felt the same way that I did and could relate to the emotions within the song. The greetings card came about because of the many, many requests for the lyrics. It’s quite a feat design-wise to have all those words fit onto a card and still look good. A very talented designer helped us out there.

When we saw you perform at the Folk Weekender at Skegness you mentioned that your daughters have started learning musical instruments. Are they improving and do you think they’ll follow in your musical footsteps?

Kathryn and Sean: Yes they are continuing enthusiastically on their own personal musical journeys. They are lovely singers and one of the twins is learning a Richard Thompson song accompanying herself on the tenor uke at the moment in preparation for the school talent show.

Me; Continuing with the Folk Weekender, we were lucky enough to win in the raffle the electric guitar you sign, but what’s the strangest thing you have been asked to sign or do by a fan?

Sean : Some boobs, back in the day during Sethmania. Folk and Roll!!

Me: Apart from the album release and performing at the Beardy Folk Festival in June (we already have our tickets) what coming up next for you in 2018?

Kathyrn and Sean: A pretty lengthy album tour between March and May will take up most of the start of the year. We have promised some more time at home as well. You have to strike a balance.

Me: And finally, is there any news on the world’s loneliest whale or are they still looking for love on the 52 hertz frequency?

Kathryn : The last I heard was that he has been silent for a while. I’d like to think that this means he’s learnt to sing in tune and found a mate.

For further information on Kathryn Roberts and Sean Lakeman, including to pre-order their new album Personae, buy their previous albums and “A Song To Live By” greeting cards, book for their forthcoming tour dates and sign up for their mailing list visit https://kathrynrobertsandseanlakeman.com.

P.S. Read my boyfriend’s review of Personae at http://folk-phenomena.co.uk/2018/03/11/roberts-lakeman-personae-review/