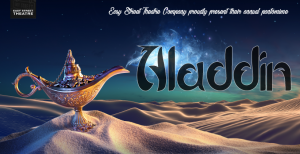 With pantomime season drawing to a close, I ended January with a pantomime I haven’t seen since I was a youth, performed by one of my favourite youth companies, Easy Street Theatre Company’s Aladdin at Sheffield Library Theatre.

The pantomime tells the story of the wicked Abanazar, who is seeking the magic lamp that contains the all-powerful Genie, so that he can rule the world. With Abanazar just steps away from succeeding, the innocent local lad, Aladdin, his brother, the cheeky Wishee Washee and their fearsome mother, washerwoman Widow Twankey are ready to intervene and save the day.

Throwing in a magic carpet, a mystical Spirit of the Ring, the Empress of China, a beautiful princess and a couple of inept policemen the company promised a fantastic tale and great entertainment, in a show packed with songs, slapstick, silliness, audience participation for the whole family and all the fairy tale magic of traditional pantomime.

With the cast full of energy and enthusiasm from the moment the curtain went up and the script full of laugh out loud comedy, brought right up to date with Brexit and zero-hour contract references, the pantomime was an evening of family friendly fun that not only introduced the audience to the potential young stars of stage in Sheffield and beyond but took them on a musical journey through much loved musicals and popular music.

After the show’s opening number provided an upbeat introduction to panto, “Who Will Buy” sung beautifully by Jacob Glerup as Aladdin accompanied by the ensemble provided a great advert for the company’s performance of Oliver! at the Montgomery Theatre from 27 to 30 June; before “One” took the audience back to the company’s 2017 production of Chorus Line, and showed Harry Foster-Major and his companions still had the audition piece nailed, whilst also provided a great welcome to the dame Widow Twankey performed by Rhys Quinn.

The “A Whole New World” duet between Jacob and Caitlin Robinson as Princess Mandarin provided the perfect showcase for Caitlin’s stunning Disney princess worthy singing voice and displayed the innocent chemistry of first love between the two of them; before in a later duet the friendship between Caitlin and Hannah Pritchard as So-Shy shone through, whilst their voices beautifully accompanied each other, with Hannah’s reminding me of a young Julie Andrews.

“9 to 5” showed off Rhys’s unexpected great Dolly Parton voice before “Diamonds are a Girls Best Friend” proved not only that Ben Storey as Wishee Washee can hit the high notes but that Caitlin’s voice is equally suited to Marilyn Monroe numbers; and Harry’s solo number as the Genie showcased he fantastic jazz singing voice that wouldn’t be out of place in any cabaret club, his well-mastered cheekiness and stage presence.

In terms of the dance numbers, “Could It Be Magic” transported the audience back to a 1990s nightclub before “Diamonds Are Forever” and “Gold” gave the ensemble the opportunity to show off their dance and scarf skills (choreography thanks to Amanda Tyas); before the glow-in the dark magic carpet ride, showcased the talented dancers tap, ballet and Chinese dragon puppet skills, before introduced the (non-traditional) panto camel.

Other highlights to mention from the show included the hilarious, strobe lighting accompanied, “Benny Hill” chase sequence; the launderette scene including mini Wishee Washee; and the Empress’s, played by Katie Staniforth, spot-on Tommy Cooper impression, leading to an unexpected “Officer and a Gentleman” moment.

In addition those I have already mentioned, stand-out performances for me came from Thea Barnes as the Spirit of the Ring, who received the biggest cheers of the night whenever she appeared on stage and performed the role and its rhymes with camp Essex lass attitude; and Alfie Wilcox as Abanazar (or should I say Bananarama or Carbonara) who combined a classic Disney baddie with bad magic tricks, humour and all the classic pantomime lines.

Other cast members who deserve a special mention include Rhys as the dame, who relished the role and his dresses, pulling off Northern working men’s club comedy far beyond his years; Jacob as Aladdin who perfected the lovable naivety required for the part and instantly meant that the audience was on his side; Ben as Wishee Washee, who blended great one liners and physical comedy with everything you’d expect from an annoying brother and the martial art “Typhoo”; and Evie Preston and Ed Maxted as the scooter riding comedy police men double act Yu-Dun-Wong and Ho-Dun-Pong who provided both the show’s slapstick humour and tongue twister word comic confusion.

There is only one more opportunity left to see Aladdin, which is on Sunday 28 January at 2pm at the Library Theatre. Tickets are £9 for adults and £8 for concessions. To book telephone 07542 131449.