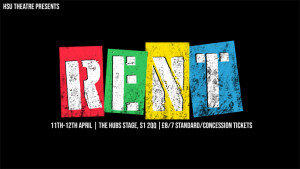 ***** I have been longing to see a production of Rent for years so was delighted when I was invited to the opening night of HSU Theatre’s production of this exhilarating landmark rock musical, and then was disappointed when I was ill and had to postpone my review to the second and last night.

With music, lyric and book by Jonathan Larson and loosely based on Giacomo Puccini’s opera La Bohème, Rent follows a group of impoverished young artists struggling to survive and create a life in Lower Manhattan’s East Village in the thriving days of Bohemian Alphabet City, under the shadow of HIV/AIDS.

Rent is the second time I have been blown away by an incredible musical in 10 days and it might be four months late for last Christmas but it will definitely become my alternative festive musical annual must re-watch.

Joe Hanley as Angel’s smooth cabaret jazz voice shone through from his introduction number “You Okay Honey?” before “Today 4 U” showed Joe is just as impressive as his character’s female alter ego with the added talents to rap and drum.

George Bowley as Roger performed “One Song Glory” with rawness, passion grit and a large hint of an American indie Morrissey before his first duet of the night with Heather Richmond as Mimi “Light My Candle” introduced her with a sexy, flirtatious, seductress attitude with the seducing honey voice to match.

Heather’s performance of “Out Tonight” proved she has the full package of attitude, voice and moves to be the ultimate 80s pop princess with attitude, immediately before “Another Day” showcased her West End worthy singing voice and growing stage and musical chemistry with George, which only got more beautifully, stunning and emotionally packed with their later duet “Without You”.

In this and every previous musical I have seen Jamie Cooke perform in, this time in the role of Tom Collins, he continues to prove he has all the ingredients to become a huge musical star, with the singing voice, stage presence and acting ability required to go far, first shown at it’s best in this production with “Santa Fe” and then in my new favourite musical duet with Joe “I’ll Cover You”.

When she finally made her first stage appearance in the number “Over the Moon” Becky Cleary as Maureen confirmed not only that her stage voice, comedy and stage presence was well worth the wait but also that she deserves her own successful off-Broadway one-woman show.

I have only mentioned him once so far, but “La Vie Boheme A” confirmed that Elliot is not only is a natural narrator for the show and natural on-stage boy-next-door but also possesses the voice and charisma to lead the opening of a full-ensemble number, that not only provided the perfect end to the show’s first half but captured the spirit of the production so far.

If I thought the finale of act one was amazing then the opening number of act two was even more so, with the phenomenal “Seasons of Love” gospel style showcasing the entire cast and ensemble’s pure musical voices and harmonies at their ultimate feel good best.

At this point I must return to Becky, who I have seen perform on many occasions in the last couple of years and now in “Take Me Or Leave Me” showed that anyone could easily mistake her for a New York singing star, with Amy’s passion and voice in the duet more than equally her superb own.

Elliot’s performing star continued to shine through in “Halloween” which showcased his professional musical talent, range and passion before his duet with George “What You Owned” brought out the Green Day and bromance in both of them.

All of this lead up to one of the most beautiful, moving, powerful and honest finales I have seen to any musical, accompanied by wonderful on-screen footage of the cast displaying the fantastic and natural bond between them all.

I must at this point mention that I loved the relaxed cabaret style set up in the auditorium and the urban graffiti set, which you can tell the company all made their mark on, transporting the audience and cast to New York and gave the experience a music venue, bar urban setting.  It’s also a great sign when the crew have to bring in extra seats before the show starts for the biggest audience I have ever seen for a HSU Theatre production and, as typing this review up and listening to the original Broadway soundtrack I struggled to tell the difference between it and the company’s.

HSU Theatre have always got better and better with every musical I have seen them perform but with this professional worthy production I cannot see how they can get any better and I am more than happy to declare this the best musical I have ever seen by any of the student companies in Sheffield.

Director Harry Lynch-Bowers two years’ work to bring his vision of this musical to the world was well worth the wait with incredible direction, choreography by his wife Fern Lynch-Bowers, and musical arrangements from the musical directors Jamie, Heather, Elliot and Amy getting the very best out of the exceptionally talented cast, who perfectly captured the accents, attitudes, looks and spirit of their characters and the era, whilst displaying fantastic romantic and friendship chemistry and making the most out of the full stage and auditorium space.