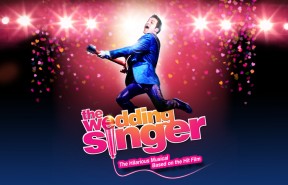 I discovered the musical of the Adam Sandler film comedy The Wedding Singer was going on tour when looking for tickets to treat a friend to only to then take the opportunity of going to the second preview show of the entire tour with my parents and boyfriend at the Curve in Leicester instead.

Set in 1985 the musical, packed with songs that captured the fun and energy of the decade, tells the story of rock-star wannabe Robbie Hart (played by Jon Robyns), New Jersey’s favourite wedding singer (with the play on words band name “Simply Wed”) who after being dumped at the alter by his own fiancée becomes seriously bummed out and makes every wedding as disastrous as his own.

Us and the rest of the audience then discovered if sweet natured Julia (X Factor contestant Cassie Compton) and her best friend Holly (Emmerdale and Waterloo Road’s Roxanne Pallett) could lure Robbie out of the dumpster and back into the limelight? That’s if Julia doesn’t first head off down the aisle with Wall Street bad boy Glenn (Brookside, X Factor and Dancing on Ice’s Ray Quinn)? Only Grandma Rosie (Hi-De-Hi’s Ruth Madoc) and the rest of the audience seems to be able to see that Robbie and Julia are the couple that are meant to be.

Playing to a sold out audience and gaining a well deserved standing ovation, through the help of the “Back to the Future” trailer, the musical took us back three decades to a show full of humour, crisp dance routines, 80s gadgets (circular vibrating beds anybody) and costumes that are in the style of the decade but slightly more flattering.

Fans of the film won’t be disappointed with two songs lifted from its soundtrack “Somebody Kill Me” and “Grow Old With You”, a Billy Idol lookalike, an updated version of the nan rap in “Move That Thang” (including Ruth Madoc’s acrobatic body double) and although George’s “Would I want to hurt you” is missing it is replaced by his “George’s Hymn” and of course we get the same happy ending.

Other stand out tracks for me (and there are many) include the Beyonce put-a-ring-on-it “Pop”, the anti-love protest song “Casualty of Love”, the surprising ballad “Come out of the dumpster”, the 80s US boy band style “Single” and the rock anthem “Let me come home”.

Although the entire cast and ensemble were on excellent form and had totally mastered the New Jersey Accent, special mention needs to go Jon Robyns and Ray Quinn who shone with west end star quality, Roxanne Pallett who proved she is a true pop princess and Madonna in the making, Ruth Madoc who proved you can be the queen of comedy at any age and Tara Verloop (as Robbie’s ex Linda) who pulled off sexy even when her head was coming out of a wedding cake.

Directed and choreographed by Nick Winston with music by Matthew Slar and lyrics by Chad Beguelin, The Wedding Singer is at Curve, Leicester until 18 February before kicking off its UK tour at the following venues: