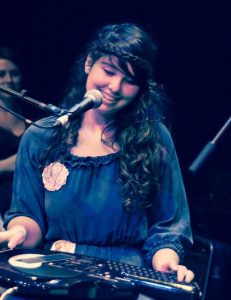 One of the highlights of this year’s Folk Weekend Oxford (the tickets part of my Christmas present to my boyfriend) was coming across the very talented and exciting singer/song writer Laura Theis, so I was delighted when she agreed to this interview (and when my boyfriend brought her album Badass Snow White).

Me: Tell us about yourself?

Laura: I am a singer-songwriter from Munich, Germany, I moved to Oxford about six years ago, and I have just released my very first solo album in the UK. It’s called Badass Snow White and was produced by the incredible James Bell. I am so happy and grateful that it had a positive response so far – Dave Gilyeat of BBC Introducing has played a couple of songs from it on his show and has said some very kind things about it.

Me: The lyrics are amazing, what inspires you?

Laura: Thank you so much! I love writing more than anything else – whether that’s song lyrics, radio plays, poems or short stories… Right now I am doing a Master’s in Creative Writing at Oxford University and I take inspiration from everything I read…

Some of my songs are completely made up, but most have a kernel of truth in them – for example my song Spider in The Music Room. That story is inspired by my very real fear of spiders and trying to feel less scared of them by imagining them humming along to the music inside their webs.

And I think a lot of songs come from imagining the kinds of things I would do and say if I were a completely different person. I really enjoy slipping into someone else’s skin for the three minutes of a song: whether that is becoming a magical creature like a mermaid or just getting to be really mean and evil or really brave or really powerful…

But I would say that another thing that really inspires me is the amazing community of musicians and other artists and performers here in Oxford. Ditte Elly and Rosie Caldecott, two of my favourite musicians, are singing harmonies with me on the album, and I had a whole choir of talented people howling along on the recording of Sunshine Werewolf; or Edinburrah-ing on the album closer Edin-burrah. And I was so lucky because the wonderful James Bell, who was the Artistic Director for this year’s Folk Weekend, helped me produce my album and he was so incredible and generous with his time and his genius and he made it into something I could never have achieved on my own.

Me:  If you really were a sunshine werewolf (I howling as I type this and you can check out the song at ) who would you bite first?

Laura: Haha, that’s an amazing question! I guess I’d have to roam quite far afield because I’m so lucky to be surrounded by so many lovely people right now who I would definitely not want to bite – only howl along with them!

Me: You’ve tackled Snow White and Wendy, are there any other characters from classic children’s fiction that you would like to write about and what do you see happening to them?

Laura: Oh, another lovely question! Yes, indeed – I have always been fascinated by fairy tales, and all the books I read as a child have had such an impact on me and the person I have become.But especially with the classic fairy tales, what I love most about them is the fact that we can keep retelling and changing them over time, they are so perfect for that and there are so many brilliant retellings from Angela Carter to Helen Oyeyemi to Emma Donoghue to the Disney film Maleficent.

What I have tried to do with Badass Snow White, and would like to continue to do in my writing, is change and challenge the way that the princesses and other female heroines are portrayed. I think it is really important to give them agency, give them a voice and make them complex and interesting. I find it so uplifting when I come across female protagonists who defy expectations, so I am really hoping to be able to create some more of those…

Me: What was the best thing about performing live at the Oxford Folk Weekender?

Laura: I loved everything about it, from listening to the other amazing performers to the warm and witty and wonderful host Sam Taplin. Everything was done with so much care and attention to detail – the sound technician was great and there even was a little station for making cheese toasties backstage – and, best of all, delicious cakes from my very favourite chef Hannah Bond (http://abondgirlsfooddiary.co.uk).

But my very favourite thing was to be able to sing together with Rosie Caldecott again, which always makes me so happy. I am a really big fan of Rosie’s songs (you can find them here https://rosiecaldecott.bandcamp.com/) and I love the way we help each other embellish our songs with mutual backing vocals, whether that’s live or on our albums.

Me: What’s up next for you and when can we next see you perform?

I am finishing my writing degree this September so I’m going to have quite an intense time until then…But you can often catch me performing on a Thursday night at the Catweazle Club in the East Oxford Community Centre, one of my favourite places in Oxford…

Oh and at the end of this year I’m going to release another album (Beasts and Loners) together with Steffi Müller in Germany. We have a long-distance experimental performance duo called beißpony…

Me: Thanks Laura for your great answers and I look forward to your new album and checking out Hannah Bond’s recipes.

For further information on Laura visit her http://lauratheis.weebly.com/ and her Facebook page at www.facebook.com/lauratheismusic/. Laura’s album Badass Snow White can be purchased at  https://badasssnowwhite.bandcamp.com/releases.