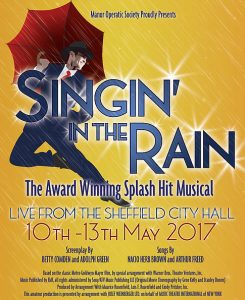 I have a confession, Singin’ In The Rain is my favourite musical of all time, so of course I couldn’t be anywhere else than in the audience for the opening night of Manor Operatic Society’s production at Sheffield City Hall until Saturday 13 May.

Based on what is considered one of the greatest film musicals of all time and set in Hollywood in the last days of the silent screen era, Singin’ In The Rain tells the story of romantic lead Don Lockwood, his sidekick Cosmo Brown, aspiring actress Kathy Selden, and Lockwood’s leading lady Lina Lamont, whose less-than-dulcet vocal tones make her an unlikely candidate for stardom in talking pictures.

With the full swing band (led by musical director and conductor Andy Collis) being only rows in front of our seats we knew we were in for a great night from the second they began playing the overture.

From her very first appearance on the red carpet it was obvious that Emma Holmes as Lina Lamont had mastered the squeaky voice and glamourous blonde dumbness required for the role via her declaring (quite rightly) that you “can’t make love to a plant” and solo song “What’s Wrong With Me” that proved she can maintain the voice and comic timing even whilst singing and stripped down to her 20s underwear, even starting to win over the audience’s sympathies.

In “You Stepped Out of a Dream” James Smith as Don Lockwood proved he had a singing voice to match Gene Kelly, alongside the beautiful harmonies of the ensemble. James smooth voice continued to shine through in “You Were Meant For Me”.

The incredible acting skills of James and Emma were at their best in the scene showing the first attempt at filming “The Dueling Cavalier” were visually they mastered silent film acting whilst verbally they threw insults at each other.

In the all tapping, all singing, all cute “All I Do is Dream of You” Isabelle Sykes, surrounded by her girls, proved why she had been cast as Kathy Selden.

The absolute star of the show though is Jack Skelton as Cosmo Brown, who in one of my favourite songs of the musical “Make ‘em Laugh” performed with amazing piano playing and even more amazing comedy, dancing, singing and the essential walking up walls.

The magical chemistry and friendship between Don and Cosmo sparkled in “Moses Supposes”, alongside great tap dancing and singing. This chemistry was extended to include Kathy in “Good Morning”, where Isabelle gave Debbie Reynolds a good run for her money. The song ended with a passionate kiss between Don and Kathy that showed the romantic passion between the couple.

By having Cosmo kick off “Broadway Rhythm” the show’s director and choreographer Richard Bradford and Linda for recognising Jack’s talent and ability to pull the number off and in fact make James performance of the number when he smoothly took over appear even stronger.

Other cast members who definitely deserve a mention include Holly Parker-Strawson as red carpet radio presenter Dora Bailey who performed the role with flamboyancy and over the top glamour, bringing the red carpet alive from curtain up; young Don and Cosmo (played by nine year old Evie May Bradford and 10 year old Benji Povey) who were very cute and talented and like their characters are destined to go far; Lee Stott as the Man on Screen in the Talking Picture demonstration, whose voice and elocution was straight out of a 1940s information film; and Simon Hance as R F Simpson, who (in the words of my friend in the audience with me) delivered the role with “perfected uptight anal-ness”.

In the title song of the musical “Singin’ In The Rain” James looked like he was having so much fun on stage that I almost wish I was dancing up there with him in the gallons of rain, whilst being grateful I was safely out of the splash zone.

With the help of two members of the cast in the aisles of the venue and Don and Kathy beginning their love duet “You are my Lucky Star” in the audience before moving their love centre stage as it deserves, the theatre audience became the cinema audience in the climax of the musical (I won’t give it away for the few among you who may not be familiar with the story).

Accompanied by even more tons of applause and water the evening ended with the entire cast in yellow macs and red umbrellas celebrating the title track and bringing the house down on a great performance.

I must praise all of the ensemble, band and back stage crew, especially for their clever use of minimal sets and electronic screens to show the scene settings and choreography, music and hundreds of costumes that captured the essence of the musical and the 1920s, and of course those who had to mop up all that water.

Manor Operatic Society, based in Sheffield and formed in the 1960s on the city’s Manor estate, is one of the largest amateur theatre companies in the UK. For further information visit www.manoroperatic.com.

Singin’ In The Rain is on at Sheffield Hall at 7.15pm every day until Saturday 13 May, with an additional 2pm matinee on the Saturday with ticket prices ranging from £11 to £20 for adults and £19 to £10 for OAPs and children. You can book, including for the splash seats. through the Sheffield City Hall box office in person, on 0114 278 9789 or at www.sheffieldcityhall.co.uk/events/Singin-in-the-Rain or through Manor Operatic Society on 01709 365108 or at www.manoroperatic.com/online-booking-form.