Morgan and West – The interview 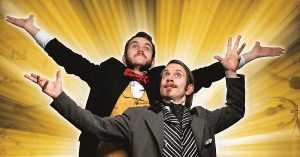 I first came across Morgan and West when asked my Facebook friends for show recommendations during one of my first visits to the Edinburgh Fringe Festival and someone I have an obscure connection with (see a later question) recommended them. From my second row seat I enjoyed one of my favourite ever Fringe shows, full of comedy and magic that brought the child out in me and has made me a fan of the duo ever since. Since then they have continued to remind me of their existence, whether bumping into them promoting their show to their appearance in a book I’ve read by comedian (another later question) or their names cropping up on a quiz show watched during visits to my parents (an even later question) so when it cropped up on my Twitter feed that they are currently on tour I had to request an interview, and was delighted when Mr Morgan (aka Rhys) said yes.

Me: For those who haven’t come across Morgan and West tell us about yourselves and how you came about?

Rhys: Morgan & West, that is to say we, are two often splendidly dressed chaps who happen to be conjurers. We tour the world with our magic shows blending mystery, illusion, mild peril, and tea. Jolly good fun for all involved.

Me: Without giving away your secrets, what inspires your shows and why do you think they go down so well with people of all ages?

Rhys: We write shows that we would want to watch ourselves. I think that’s all one can do as a performer and an artist really. If you start writing to someone else’s brief you never produce your best work. As a result I think our enjoyment and enthusiasm shows through in what we perform and, dare I say it, is rather infectious to the audiences!

Me: What can audiences expect from your current tours “More Magic For Kids” and “Time Travelling Magicians”?

Rhys: Lots of magic, obviously. Plenty of humour, that’s a given. Some rather fine waistcoats, made by Mr West. And two completely different, baffling, bamboozling, down right befuddling pieces of theatrical entertainment.

Me: You’re on tour now up until April next year but what’s the best (and possibly worse) thing about going on tour together?

Rhys: The tour should be going all the way to July, when Mr Morgan gets to go on holiday (I’m sure Mr West will go to but I’ve not asked his plans). The best thing is the companionship and touring with your best friend. The worst thing is pretty much exactly that as well. Thankfully we’ve known each other long and well enough that ‘awkward’ silences are actually rather comfortable if we run out of things to talk about.

Me: You are performing your version of A Christmas Carol in Oxford from 5th to 24th December. If the ghost of futures yet to come visited you on Christmas Eve what would you hope to be shown?

Rhys: Golly… not my own grave *spoiler alert* for starters. I’m not entirely sure. I’d be most delighted with just some future images of us content and happy really. That’s all we’re after. And some biscuits. Good biscuits mind, no digestives or nice biscuits. Hob Nobs, and bourbons please and thank you.

Rhys: I love a good obscure connection. My grandfather (I am reliably told) used to cut Tom Jones’ hair when he was a lad. But then again I am from the Rhondda Valleys where everyone knows each other through at least four other people…

Me: You once played a board game with Dave Gorman. Are there any other board games you recommend and if you could play board games with any other famous people who would you choose?

Rhys: My current board game recommendations are: Star Wars Rebellion (an asymmetric two player alternate history of the original three Star Wars films), Pictomania (cracking party game), and A Feast For Odin (resource management stuffs). Oh, and the new edition of Through The Ages. That’s hard going but blooming brilliant. As for who I’d play with… I’d want to play with someone who actually was into board games and so knew the rules as I’m rubbish at explaining them. So the safest answer is Wil Wheaton but in all honesty I’d love a game of Pictomania with Patrick Stewart and Tom Baker.

Me: And finally, you were recently a correct answer on BBC1’s “Who Dares Wins” in a question about the UK’s top 100 comedy double acts. How did that feel and if you could be the answer to a question on any other quiz show what question would you choose?

Rhys: It made our day, quite honestly. Both in terms of the company we were with on that list and also being a quiz show answer. I (Mr Morgan) did a few TV quiz shows in my youth (Weakest Link, Egg Heads, Brainteaser…) and our ambition is to be on Celebrity Pointless so I feel that is one step closer. Frankly we’ll take being any answer, even if it’s derogatory. All press is good press!

The duo are currently on tour and I highly recommend you catch them live. Their forthcoming tour dates, including links to book tickets, are available at www.morganandwest.co.uk/live-dates.