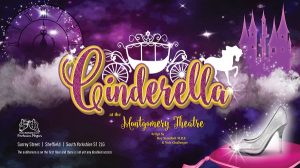 ***** For me Cinderella will always be the ultimate panto, full of romance, makeovers, beautiful shoes, charming princes, fairy godmothers, ugly sisters and Buttons, which is why I was delighted to be in the audience for the opening night of the Wales Methodist Pantomime Players production of Cinderella at Montgomery Theatre, Sheffield on Friday 13th January (not unlucky for them).

Leaving me with a smile on my face throughout, the panto was packed full of family friendly traditional, local and contemporary comedy, audience singalongs, plenty of sweets thrown into the audience and distributed on stage, indoor fireworks, popular songs, skeleton and gorilla chases (yes you read that correctly), the coolest glittery carriage I have ever seen, flying from the Fairy Godmother (played perfectly by Ann Mann), who along with Cinderella (Toni C 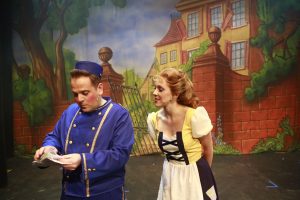 ook) was the most Disney fairy tale like you can get in human form, and possibly the largest and most enthusiastic ensemble I have ever seen from the widest range of ages (a challenge to costume that along with the Dame and the Ugly Sisters dresses was successfully achieved by the costume department). I also loved that Cinderella and Buttons (Paul Burgress) met the children in the foyer after the show for a photo opportunity (Buttons with your charm and humour I think Cinders chose the wrong man).

Humour was a major part of the show, from the “Steptoe and Son” and “Friends” theme tunes to the brilliantly pulled off Laurel and Hardy style decorating scene featuring Buttons and the politically named handyman Breksit (Dan Schofield) and Bodjit (Lee Philips), the ugly sisters Chardonnay (Joseph Bairstow) and Rose (Philip Burgess) who reminded me of Little and Large and King Claude (Martin Crowther) who reminded me of Bobby Ball. For their brilliant comedy timing I must also congratulate Dave Froggart who played the sight and hearing impaired Lord Chamberlain incredibly and panto dame Baroness Hardup (Nick Challenger) who is probably the best panto dame i have ever seen perform (and not because I want his igloo frock). The first night nerves, costume and bench problems and occasional forgot line and how successfully the company recovered also added to the whole effect.

Standouts for me musically were the voices of Dandini (Hollie Reilly) and the soloist from the ensemble who kicked off the second half with “I Wanna Dance With Somebody” closely followed by Alison Wade as Prince Charming. i also need to congratulate the very talented band accompanying my favourite musical numbers from the show including  “We Are Family” and the unexpected but pleasure packed “Monster Mash”. 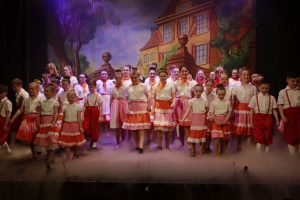 dist Pantomime Players was formed in 1945 by Roy Staniforth MBE, who at the age of 81 handed over the reigns of the company, including the role of panto dame/producer/director to his successor Nick Challenger. Cinderella is their 72nd panto. For further information on the panto telephone 0114 303 0376 or email wmpp@walesmpp.co.uk.

2017 is Wales Methodist Church Pantomime Players third year of supporting local charities, with a focus on children, as they want to play a part in ensuring that children grow to love the theatre, regardless of background and circumstance, a focus which I share their passion for. The five charities they are supporting this year are Sheffield Royal Society for the Blind, Sheffield Fostering Services, Rotherham Fostering Services, Children’s Heat Surgery Fund and Rotherham Young Inspectors. For further information on these charities and how you can support them click on their name.