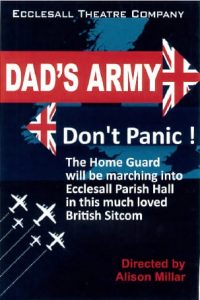 ***** In what has become a year for classic sitcoms to be brought to the Sheffield stage and in the 80th anniversary of the start of the World War Two, it feels only right to “don’t panic” and be in the audience for the opening night of Ecclesall Theatre Company’s latest production.

The play brings the classic BBC TV sitcom starring Walmington-on-Sea’s Home Guard during Britain’s finest hour comes to the stage, including all of the original characters fans love.

This production is a warm and lovingly faithful to and a celebration of the classic sitcom, perfectly capturing the comedy, spirit and character that made it great.

Whilst the first of the three episodes brought to life contained the classic “Don’t tell him, Pike” line that got the biggest of many laughs of the night from the audience, the second, featuring beautifully innocent chemistry between Phil Ashton as Captain Mainwaring and Sian Butler-Walsh as Mrs Gray was a sweet and more gentle comedic take on Brief Encounter. Before the third, not giving away the plot, captured a traditional British pastime that I hoped to have avoided by skipping the folk festival season this year, but also reminded the audience of the writers’ love of humiliating the characters and of fancy dress.

Supported by a detailed set, designed and built by David Crook and the team and dressed by Alison Millar, that brought the church hall to life within the church hall venue, and the uniforms and styles of the time, thanks also to Alison in costumes, with even the box office and refreshments staff in head scarfs, all of the cast, especially the patroon, brought their characters delightful to life.

Whilst Richard Bailey-Jones as Pike captured ever aspect of Ian Lavender’s original portrayal; Adam Diskin as Frazer, who we gave the award for best supporting actor to in 2018, perfected the essential Scottish accent, showcasing his comedic talents successful cross generations of characters, and getting the biggest round of applause of the night for his “doomed”; Gerald Brown the bumbling older Godfrey; Graham Hill as Wilson the upper class charmer; and Gary Jarvis the lovable innocent personality of Jones; it was Phil Ashton as Mainwaring and Michael Dobsworth as Walker who truly made their characters their own, with Phil capturing the authority but also bringing a warmth and vulnerability to the captain that often felt missing from the television show, and Michael’s performance combining the lovable rogue with an unexpected hint of a combination of actors Stephen Lewis and Blake Harrison. I must also give a special mention to Sarah Rose for bravely and enthusiastically playing the recorder live on stage.

All in all this is a highly pleasant, nostalgically delightful, comedic way to spend an evening and should not be missed by any fans of the classic British sitcom and the writing Jimmy Perry and David Croft in and around the Sheffield area.