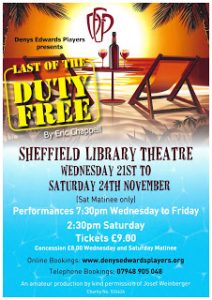 I’m slightly too young to remember the sitcom Duty Free but as someone who loves British sitcoms I was delighted to be in invited to the dress rehearsal of Denys Edwards Players production of Eric Chappell’s follow up to his original sitcom.

​When working class David and Amy met upper-middle class Robert and Linda whilst holidaying at the San Remo in Spain, their differences were immediately apparent. But, opposites were proven to attract, and a most unlikely romance developed, with extraordinary consequences. In this play, they are now back, David more lustful, Amy more cynical, Robert more dangerous, and Linda more romantic than ever. With love in the Mediterranean air, the audience will watch on in disbelief as deceptions, misunderstandings and preposterous situations unfold, with the love struck protagonists trying every trick in the book in order to keep their amorous intentions a secret.

Featuring laugh out loud comedy throughout thanks to the script of Eric Chappell, the direction of Sue McCormick and the talent, comedic timing of all of the cast to bring to life their characters, relationships bonds and chemistry, this superb production should not be missed by any fans of the golden age of British sitcoms.

In a production of superb performances the stand-out performance of the night came from Richard Bevan as David who perfectly the channelled the late great Keith Barron, who played the role in the original sitcom, leaving the audience in stitches with every word, tone and look and being a major part in all of the play’s funniest moments.

Making up the other three parts of the two main couples, Angela Blackwell as Linda captured the glamorous sophistication and, there I say, manipulation required for the role; John Castell as her husband Robert immediately reminded me of Tom Conti; and Jan Ibberson as David’s wife Amy reminded me of Denise Black.

Outside of the four main characters Bill Darwin as Carlos’s the hotel waiter wonderfully combined an elderly arthritic Blaketon from On The Buses and Manuel from Faulty Towers; Catherine Newsome as Claire, one half of the newly wed couple, reminded me of a younger Rebecca Front; and Marc Vestry as her new husband Jeremy proved he is equally as comedy talented bringing alive the work of Eric Chappell as he was earlier this year with the work of Mike Leigh. The characters of Claire and Jeremy were a welcome addition to the play not only adding youth and young love but also acting as non-audience observers to the chaos of the other two couples.

Comedic highlights from the play included Richard and Angela’s frantic miming skills at the end of scene one, leaving the audience both in stitches and  safely in the knowledge that they would never beat us at charades; Richard’s blind German routine with John on the balcony; and the proof that the throwing of cream cakes and musical boxer shorts will never go out of comedic fashion.

The set (thanks to the set design and construction team of David Shaw, Alan Mitchell, Rob Calnan, Keith Holdsworth and Simon Warner) of the hotel, complete with  balcony and sun loungers perfectly captured the feel, warmth and atmosphere of a Spanish resort hotel; supported by Brad Shaw’s lighting that took us from evening to day and back to evening under a Spanish sky; and Sue Cox in wardrobe captured the difference in holiday attire between both classes and generations.

A perfect sun-filled escape on a cold November evening at a fraction of the price of a last minute package holiday, Last of the Duty Free captures both the essence of the British sitcom and image of Brits abroad, in a way that more recent attempts such as Benidorm have failed to achieved. The play puts the situation and the comedy in sitcom and proves the recipe for the genre’s success works just as well on stage as in half hour television doses. Whilst mentions in the script to moments in the original series will make fans of the sitcom nostalgic for its original episodes and desperate to catch up with the couples whilst us newcomers by the interval will feel like we have known the characters all our lives and planning to add the box sets to our viewing lists.

Last of the Duty Free will be performed at Sheffield Library Theatre from Wednesday 21 to Friday 23 November at 7.30pm and on Saturday 24 November at 2.30pm. Tickets are £9 with concession tickets available for the Wednesday and Saturday performances for £8. For further information and to book visit www.denysedwardsplayers.org/current-production-2 or telephone 07948 905048.