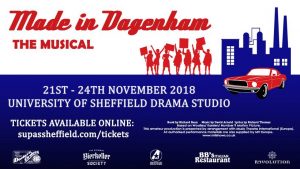 ***** In the 50th anniversary year of the Ford women’s worker strike that kicked off the fight for equal pay for women in the UK, it felt only right to see a production of Made in Dagenham, the musical inspired by the true story and based on the movie of the same name, and I knew if any Sheffield company could bring the story to life on stage it would be SUPAS.

Made in Dagenham is an uplifting musical comedy, about friendship, love and the importance of fighting for what is right. Set in Essex in 1968, it tells the story of Rita O’Grady who each morning worked hard enough trying to get her husband out of bed, get the kids Graham and Sharon off to school and get to work at the factory on time. Rita’s life changed forever when it’s announced that the girls in the sewing room of Ford’s Dagenham car plant would have their pay grade dropped to unskilled. Drawing on a strength she never knew she had, Rita leads her colleagues in a battle against the might of Ford and the corruption of the union that is supposed to protect them. As the girls’ inspiring journey gets bigger than anyone could have imagined, the pressure is too much for some, the audience will discover if Rita can keep up the fight and the happy home she’s worked so hard for?

The opening number “Busy Woman” transported the audience immediately back to the 1960s Essex with Megan Armson as Rita, accompanied by a wonderful choral accompaniment of Essex female machinists in fine voice, capturing the tone, voice, accent and attitude needed and getting the audience firmly on her side from the very start; before “Made in Dagenham” gave the male members of the cast the opportunity to show of their working class male soulful voices with attitude. Both numbers confirmed from the very beginning of the musical that the audience was in for a fantastic evening of great voices, numbers, musical arrangements and choreography that wouldn’t be out of place in a West End production.

With a Cilla-esque singing voice, Martha Evans as Claire perfected lovable but dim, showcased at it’s best in “Wossname”; before “Always a Problem” gave Kieran Jenkins the opportunity to portray prime minister Harold Wilson as a hilarious, working class, sexually frustrated, Yorkshire Dick Van Dyke, looking, sounding and acting decades beyond his age and with his very own well choreographed backing duo.

“I’m Sorry, I Love You” was the ultimate, from the heart, forgiveness duet and Ryan Footitt, as Eddie, displayed a sweet and genuine voice, accompanied by a Drifters style backing, meant that the audience has forgiven him almost before Rita did; whilst Lianne Abrahams as Connie sang her number “Connie’s Song” with a passion, strength and maturity of a woman who has been fighting the system for longer than Lianne has been alive.

“Everybody Out” was not only the best ensemble musical number in a musical full of great ones but also cemented itself as possibly the best ever ending to act one of a musical with a chorus that will stay in heads of anyone who has ever wanted to be treated equally and fairly for a long time to come.

Opening the second act “This is America” turned the style and choreography of the show on it’s head, led by a young JR / Trump type Tooley, played with great energy and attitude by Nathan Sloane, in a number that combined political rallies with cheerleading and hip hop, with the entire cast getting involved to display everything that American’s think is great about America, including Megan rightfully dressed as Wonder Woman.

“In An Ideal World” stole the show musically in the second half and gave Katie Roberts as Barbara Castle the opportunity to showcase her stunning singing voice, and in fact the best singing voice of the night, with stage presence to match, that could get her any musical role she desired. Following on, “We Nearly Had It All” wonderfully displayed Megan’s leading lady voice and ability in a vocal performance where I couldn’t have been the only audience member almost moved to tears.

Megan’s portray of Rita’s speech in the musical’s finale is guaranteed to make all audience members proud and although we all knew what it would achieve we still silently prayed that it would get voted through, making us want to “Stand Up” in support of her powerful plea, and confirmed that SUPAS had presented a phenomenal production of Made in Dagenham made in Sheffield.

Rightfully, the stand-out performance of the night came from Megan as Rita who possessed an amazing voice, acting ability, confidence and stage presence, making the character her own. She thoroughly deserves a great career in musical theatre and I can see her making the likes of Sheridan Smith envious. Opposite Megan, Ryan portrayed Eddie with genuine emotion, and a hint of a young Lee Ross, sharing the natural chemistry with Megan of childhood sweethearts who have been together over a decade.

The other cast member, who in addition to those mentioned above in connection to musical numbers, was Katie as Barbara Castle whose portray as the MP was thoroughly believable, fighting for what was right and leaving me to believe that half a century on she would be far better leading the nation than our current prime minister.

The direction of director Jonathan Payne and assistant director Laura Bowles and choreography of co-choreographers Lana Pitcher and Lily Backler brought the very best out of the cast and made the small stage feel the size of a national theatre’s stage through their incredible use of it. From elsewhere in the production team I must also praise the work of vocal coach Maria MacAninch who brought the regional accents and class out in all of the cast.

Backstage I must highly praise costume designer Molly Wyatt and costume assistant Kate Alhadeff for capturing the styles of the period including the story’s iconic red Biba dress; and set designer Tom Robbins for the cleverly designed yet simple set that adapted to all of the scenes needs, complete with sewing machines, fondue sets and well-timed pigeon, and also displayed the talented 11 piece band who provided a fantastic and faultless musical accompaniment throughout.

It might be a new academic year and the production might be full of new faces, but with Made in Dagenham SUPAS prove they are as strong if not stronger than ever, with new talent that is guaranteed to go far and continuing to offer professional quality musicals at a fraction of the price. I can’t wait to see what the new and existing members of the company do next.

Transporting you back five decades, there is no better way to celebrate the Ford women’s workers achievements than this performance that would make the original women proud. Congratulations to SUPAS for brining their story to a new generation of students who over the next few years will be entering the workforce and benefiting from what they achieved.

I highly recommend anyone who loves great musicals to book their tickets for this production and guarantee you will leave the theatre wishing you could go through life with a talented choir of factory workers as your backing singers.

Made in Dagenham will be performed at Sheffield University Drama Studio at 7.30pm until Saturday 24 November with an additional 2.30pm matinee on the Saturday. Tickets are £9 for adults and £7 for concessions. To book visit www.ticketsource.co.uk/supas.

SUPAS next production will be Into The Woods at the Merlin Theatre at 7.30pm on Thursday 6 and Friday 7 December. Tickets are £9 for adults and £7 for concessions. To book visit www.ticketsource.co.uk/supas.

SUPAS (Sheffield University Performing Arts Society) is the University of Sheffield’s only society specialising in musical theatre, putting on two shows each academic year in the University Drama Studio along with a variety of workshops and other projects. Their core philosophy is to have fun and be as inclusive as possible. For further information visit www.supassheffield.com, like on Facebook at www.facebook.com/supassheffield, follow on Twitter www.twitter.com/supasshef.