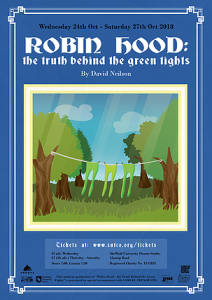 In the 25th anniversary year of the comic film re-telling of the legend of the man in tights, it felt only right to be in the audience for Sheffield University Theatre Company’s own version of the truth behind the outlaw, bringing his story alive on stage.

“Feared by the bad, loved by the good” goes the song about Robin Hood, but in the case of Albert Ross, the distinction is not quite so clear-cut. For Albert is a coward, transferring his allegiance from Merry Men to Sheriff and back again at the drop of a hat – or rather, at the point of a sword. All of which lands Albert, his wife, Robin and Maid Marian in some very awkward situations… This version by David Neilson offers a comedic retelling of the well-loved tale of Robin Hood, portraying the hero in a different light.

Sarcastic, witty, dry, full of puns and attitude and deeply influences by the likes of Blackadder and Monty Python including a Life of Brian inspired finale, this production is the perfect laugh out loud escape on a cold autumn evening without feeling the need to go into full panto mode, though expect some audience participation and possibly far too many merry Christmas mentions with still two months to go to the big day. It also introduces an exciting and talented new cast of students to the drama studio stage in a production that does for British folklore what Plebs does for Roman times.

The best performances of the night, which were both true comedy gold, came from Rhys Kenyon as Albert Ross and Xander Gillespie in a range of roles. Both actors possessed superb comedic timing and the wonderful ability to made the audience grin and laugh out loud with every word, tone, movement and facial expression, in a way that would make the likes of Rowan Atkinson and John Cleese proud. In Xander’s case if I ever wanted a tree to narrate my life and offer me advice or someone to play a game of charades with he would be my first hilarious choice every time.

Other cast members who deserve a mention include Cedric Vermeire, whose performance seamlessly blended the acting talents of Stephen Fry and Matt Berry with that of classic Hollywood and Disney baddies to bring his main role as the Sherriff to life. In their shared scenes Cedric and Jack Hughes as Gisbourne displayed a comedic chemistry reminiscence of Fry and Laurie in their Blackadder / sketch show days. As Gisbourne, Jack also displayed some of the best drunk acting I have seen on a Sheffield stage, while in bright green tights in his other role as Little John, Jack confirmed that he has the best legs of the night.

Like all good modern re-tellings of the outlaw’s story, Saskia Dowley’s performance as Maid Marian more than captured her as independent, capable and not to be messed with woman, whilst displaying a sweet, natural chemistry with Robin Hood, played by Daniel Rodgers. The other cast member I must mention is Ellen Trevaskiss who as Merry Man Scargill performed with the attitude and spirit of Maid Marian in the 90s television series “Maid Marian and Her Merry Men” whilst her performance as Mouth wonderfully channelled her inner Mrs Miggins from “Blackadder: The Third”.

This cleverly written, directed and acted interpretation of the well-loved story will appeal to anyone who has heard tales of the Nottingham outlaw and enjoys laugh out loud British comedy bringing the legend to a new generation with hilarious results.

Robin Hood: The Truth Behind The Green Tights will be performed at Sheffield University Drama Studio at 7.30pm until Saturday 27 October. Tickets are £5 in advance from www.sutco.org/tickets and £7 on the door.