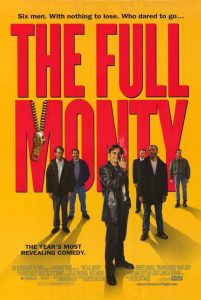 To celebrate the 20th anniversary of the UK cinema release off The Full Monty on 29 August (I saw the preview of it two days before due to a magazine offer and then on the day itself went and brought the soundtrack on CD) I was delighted that Steve Huison (aka Lomper in the film) agreed to an interview, though it did come with the condition from Steve that only if I could come up with questions he’d not been asked over the last 20 years. Of course I did my best to rise the challenge and according to Steve “You’ve managed to do what no one else has in the last 20 years. Good questions” and he answered all the my questions so I must have succeeded.

Me:  What would you like to have happened to your character Lomper (and the other characters) in the two decades since we last saw them?

Steve: It would be nice to think that the final result of the story (the strip) was cathartic enough to build their confidence and forge lasting friendships. Perhaps the gained confidence also helped some of them to develop their full potential. Lomper could have gone on to develop proactive musical ambitions.

Me: What do you miss most about the time you spent in Sheffield and have you been back since?

Steve: I’ve been fortunate enough to have the opportunity of working in Sheffield many times since 1996. I also have close friends there that I try to visit regularly. Recently I performed at the wonderful Cabaret Boom Boom, though I was heavily disguised (as Wee Willy Nelson) and I think the audience would have been oblivious as to who I was under the false beard and bandana. It has to be said I will miss the trees!

Me:  I have been to the Shiregreen Working Men’s Club, where the final scene was filmed and the canal were Gaz was left stranded on top of the car. Are there any other locations from the film that you loved and would recommend fans visit?

Steve: It’s difficult to remember where all the locations were. I suppose avid fans could always gaze at the derelict shell of Hallam Tower which was the Trust House Forte Hotel back in the day, and our home for the nine week shoot. If walls could talk!

Me: According to Dave in the film at the funeral of your character’s mother “there’s nowt as queer as folk”. What do you think is the most queer thing about folk you’ve met through being part of the film?

Steve: If I get quietly recognised in public people will often nonchalantly turn to whoever they are with and try to discreetly whisper to them of my presence (my wife and I refer to it as rubbernecking). They think they are being discreet, but over time i’ve become heightened to the repeated mannerism. At first I thought I may have been paranoid, but 20 years down the road?

Me:  If you could play any instrument in a brass band what would it be and what song from the film’s soundtrack would you play on it?

Steve: I own a trombone, and now and again it’s gets an airing. Perhaps one day I will learn to play it properly. ‘Je t’aime’ would sound nice on it.

Me: How will you be celebrating the 20th anniversary of the film release?

Steve: Probably wondering where the time went. Also I’ll be stuck on public transport most of the day

Me: Myself and a friend are marking the occasion by going to a special screening of the film at Showroom Cinema, including the Unite the Union Brass Band who you performed with in the film and featuring a Q&A with your co-stars Hugo Speer (Guy) and Wim Snape (Nathan). If you could ask Hugo and/or Wim any question what would you ask them?

Steve: I was in contact with those two a couple of weeks ago, so I have no particular burning questions to ask them. However if you are wanting to ask questions of them you could ask Hugo to recount the ‘chair on the hotel window ledge at 5 AM’ episode, and if it had gone wrong would it have jeopardised the rest of the shoot? You could also ask Wim his advice for child actors in the film industry.

Me (question suggestion thanks to my colleague Lizzie): And, finally, what are the questions you have been asked most over the last 20 years?

Steve: Did you really take all your clothes off? When you started the film did you anticipate it would be such a huge success? How will you spend all that money? The film grossed £180 million in the box office. Just how much did you make? What’s Robert Carlyle really like? Are you still in touch with the rest of them? What have you done since?

At the  time of publishing this interview there are still a few tickets left for the 20th anniversary screening of The Full Monty, including the Unite the Union Brass Band and a Q&A with Hugo Spear and Wim Snape at Showroom Cinema, Sheffield. For further information and to book online visit www.showroomworkstation.org.uk/the-full-monty. Alternatively you can celebrate the 20th anniversary with the other option I have also taken and mark the occasion by buying your first home in Sheffield.