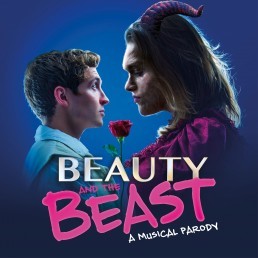 ***** I have a confession, I have not seen either of the two Disney Beauty and the Beast films, but I do love a good fairy tale and a good twist in the tale, so with a week to go until Christmas I was delighted to be in the audience for the first performance in Sheffield of Fat Rascal Theatre’s UK tour of their gender-swapped musical parody of the story.

Beauty and the Beast turned out to be a wonderful alternative fairytale for the Christmas season, featuring a cleverly re-worded version of the script and songs from the Disney movies packed full of laugh out loud comedy, sarcasm, wit, contemporary, literature and local references and adult humour, without the need to be crude. This was wonderfully brought to life by a superb cast of only five performers who all possessed West End worthy acting and singing talent and superb stage presence, as well as the ability to seamlessly transformations between multiple characters and puppeteer some cute yet slightly terrifying furry animals.

Although Jamie Mawson as Beau perfectly captured the Disney prince voice, looks, naivety and, intentionally irritating, likeability and enthusiasm for life required for the role with the growing chemistry, friendship and bond between him and Robyn Grant as the Beast (more on her later in the review) feeling incredibly genuine; my favourite performance of the show came from Katie Wells as the sex-obsessed, self-obsessed, female jock equivalent aristocratic Chevonne.

Other cast members who deserve a special mention include Aaron Dart’s accented straight out of “Trainspotting” Mr Spout and his Russell Kane inspired attitude and charisma as the mirror Foxy Enchanter; and Allie Munro especially as Beau mother Maureen, who reminded myself and my friend of Sue Perkins with just a hint of Jennifer Saunder’s Edina.

My stand out musical numbers included the clever musical arrangements of the duet between Jamie and Robyn “What Would Jane Austin Do”, the clever rearrangement of “Be Our Guest” to “Have a Brunch” that not only showcased the singing voices at Allie, Katie and Aaron but also left the audience all very hungry; “Every Rose Has It’s Thorn” that was the perfect showcase for Robyn’s beautiful singing voice, Yorkshire lass attitude and sassiness, passion and her wild hog snorts; and Aaron’s superb singing voice on “Beauty and the Beast” accompanied by the wonderfully choreographed by Jed Berry’s, dance routine between Jamie and Robyn, complete with hints of Adam and the Ant’s “Prince Charming”.

One of my favourite moments of the show was at the beginning when it opened with the cast bringing to life the Disney movie credits, including the vintage Mickey Mouse immediately followed by the beautifully detailed cut shadow puppets introducing the story. I also loved the flamenco dancing, onesie wearing, eggie opening the second act; and the cleverly directed sword and stage fight scene between Robyn and Katie. However you can’t discuss Beauty and the Beast without mentioning the Beast’s transformation scene, and Robyn performed this with large than life glee and delight, providing a wonderful happy ending that thrilled us non-traditional feminists in the audience and ended with the perfect stage kiss with a twist.

Fun, professional, original and highly entertaining, Beauty and the Beast was the perfect finale to my packed year of theatre reviews. The show is on at Theatre Deli at 4.30pm and 8pm daily until Saturday 22 December. To book visit www.theatredeli.co.uk/Event/beauty-the-beast.

Fat Rascal Theatre was set up in 2016 by a group of East 15 graduates. Since then they have quickly established themselves as a home for new musical theatre, having produced five brand-new musicals in the space of two years. They are a company run by women and challenge the constraints of being a female within the industry, and discuss social and political issues through an accessible and appealing format to engage a wider audience. They are supported by the English Touring Theatre and are an Associate Company of the King’s Head Theatre in London. For further information visit https://fatrascaltheatre.com.