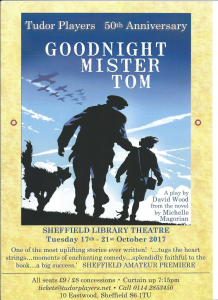 ***** One of my favourite children’s book and my mum’s favourite ever television adaption, I was delighted to be in the audience for the opening night of Tudor’s Players and the Sheffield amateur theatre premier of Goodnight Mister Tom.

One of the most uplifting stories ever written, Michelle Magorian’s novel was adapted for the stage by David Wood. Set during World War Two and at its heart a celebration of love and friendship, Goodnight Mister Tom it tells the story of William Beech , who is evacuated to the English countryside where he develops a moving friendship with elderly recluse Tom Oakley until his mother summons him back to London.

This production was a beautifully a performed and presented adaption that is destined to melt the hearts of any audience members, leading me to overhear several audience members declare it “the best play they have ever seen” as they left the theatre. For those lucky enough to have tickets this production is a must for fans of the book new and old, leaving me to dig out and re-read my own copy. It also proved that the company is still going from great strength to even greater strength after half a century (and nearly 150 shows) leaving me already looking forward to their next season.

Covering themes that are as relevant today as they were during World War Two of poverty, religion, death, education and child abuse, with the cast bringing to life the script, attitudes and emotions of wartime, I must also praise the music, set and costumes, which came straight out of the 1940s and perfectly capturing the feeling or the era, whilst the big screen cleverly reflected the differences between the country and the city and transported us through the seasons.

The main focus of the play is the relationship between Tom (played by the company’s president Roger Bingham) and William (played by 11 year old Pierce Fitzgerald), which was so beautifully acted and felt incredibly natural, full of deep love and devotion, perfectly capturing the emotions and characteristics of their characters that fans of the book will instantly recognise and proving that Pierce has a great talent for so one so young. The other great love of Tom’s life is his dead wife Rachel and his reminisces of her were performed by Roger with genuine grief leading you to believe that she is deep within his heart.

The contrast of William being performed by 11 year Pierce whilst the rest of the main child characters played by adults (perfect practice for their forthcoming performance of “The Flint Street Nativity” with Charlie Russell, Charlie Gascoyne and John Moran delightfully bringing out their inner child) further displayed the vulnerability and innocence of William in comparison to them. Of course I can’t mention the other children without praising Ross Banister, who played William’s (or should I say Will’s) new best friend Zach with great childlike enthusiasm and confidence that almost seemed to bubble over, as well as possessing the brightest stripped jumper you are ever likely to see on stage.

Other cast members I must mention include Judith Wade as William’s mother Mrs Beech, performed in sharp contrast with Tom full of deep wrongly directed passion, discipline, fear of god and mistrust of others and change; Rod Duncan as Doctor Little and Ric Waterhouse as Mr Hartridge who captured the professional stiff upper lip the era required; and Bridget Ball as the nurse and Carolyn who played the hospital sister (the company’s remaining original member) who performed their roles with stern caring and authority, helping to provide that its love and not regulation that is often the best medicine. I must also give credit to the entire ensemble whose voices and body language perfected reflected both those of their countryside and city counterparts, including the young children, who were well-behaved and naturally sweet.

I must also mention Joe Thompson whose puppetry brought Tom’s dog Sammy to life, providing both light hearted moments and offering natural dog like movements and canine bonds with Tom and William to such an extent that you almost forgot Joe was there. Whilst discussing puppetry, I must also mention Charlie Gascoyne, who as well as playing one of the twins Carrie, cutely puppeteered a very cuddly squirrel.

I must also highlight the beautiful performances within the play of “In The Deep Midwinter” and “Wish Me Luck As You Wave Me Goodbye” which show off the incredible singing voices of the cast; the cast especially wannabe thespian Zach bringing alive within the play the plays of the Little Weirwold’s amateur dramatic company; the sound team and ensemble who wonderfully captured the crowds and busyness of London in the station, air raid shelter and blitz scenes, with the dark of the city and William’s time there contrasting brilliantly with the light of the countryside; and William’s bad dream sequence whose shocking visuals, sound and movement left the audience on the verge of screaming yet alone poor William.

The neglect of William and his baby sister was pulled off so powerfully by the mother that audience members could not help getting tears in their eyes and wish to protect him, whilst being emotionally grateful that Tom rescues him, proving that in very unique circumstances kidnapping is the right thing to do; whilst the plays ending showed that “I love you” and “dad” are some of the most beautiful words in the English language, whilst the lyrics of “Wish Me Luck As You Wave Me Goodbye” have never been more poignant.

Tudor Players, named after Tudor Way where the Library Theatre is located, present three full length plays a year with Goodnight Mister Tom, on until 21 October at 7.15pm at Sheffield Library Theatre, being their third in this their 50th anniversary year.

Sadly for audience members but great news for Tudor Players, Goodnight Mister Tom has a full house all week but the company have announced their 2018 shows, which are The Flint Street Nativity from 13 to 17 February, A Bunch of Amateurs from 15 to 19 May and Ben Hur from 16 to 20 October all starting at 7.15pm at Sheffield Library Theatre. On sale from Tuesday 14 November, tickets are £9 (£8 for concessions) each and are available by email at tickets@tudorplayers.net, by telephone on 0114 285 3450 or by writing to 10 Eastwood, Sheffield S6 1TU. 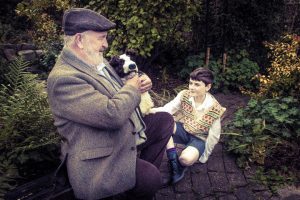