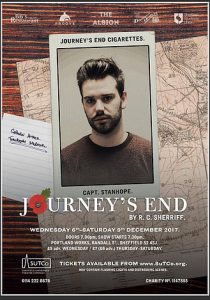 ***** As we reach the 100th anniversary year of the end of World War One it felt right to be in the audience for the opening night of SUTCo’s opening night of Journey’s End, a play concerning the lives of a group of British Officers on the front line and opens in a dugout in the trenches of France, with the play telling the story of Raleigh, a new 18-year-old officer fresh out of English public school, who joins the besieged company of his friend and cricketing hero Stanhope, and finds him dramatically changed.

The historic industrial setting of Portland Works and the audience coming into the intimate venue to a soldier in WWI uniform solemnly singing traditional WWI songs and playing an accordion, combined with the detailed bunker set lit with traditional lights, and background noises of bombs and guns, immediately transported the audience back to the time and into the mind-set of the show.

The outstanding performance of this outstanding production came from George Evans as Stanhope, who perfectly combined maintaining a stiff upper lip persona and authority whilst trying to hide his alcohol dependency and post traumatic stress disorder, before either of these were recognised conditions, gradually breaking down and toppling from the hero status Raleigh has of him.

My other standout performances cam from Kirsty Magee as Osbourne, who played the role with authority, loyalty and wisdom, and like all of the cast, especially the women in male roles, perfectly captured the speech, body language, attitudes and class structure of the time, whilst resisting the need for stereotypes. Osbourne’s reading of “Alice in Wonderland” was also a lovely reminder of the company’s second production of this semester.

Other cast members who deserve a mention include Katy Leigh as Raleigh, who played the part with enthusiasm, pluck and youthful naivety, that was gradually destroyed as the show went on; Laura Bolshaw as Mason who portrayed a desperate need to please and guilt when unable to do so whilst bringing a lightness to the script; Jack Hewitt as Trotter, who portrayed his character as a genuine, working class lad who is both likeable and a bit dim; Jack Cadman as the Colonel, who brought to life a character old and wise beyond his years and trying to hide the signs of being battered by war and the politics of war; and Ellen Trevaskiss’s performance as the terrified German soldier, who reminded the audience that the soldiers on both sides were human and equally frightened by the reality of war.

I must also praise the on stage chemistry that contributed to the relationships between the characters, especially Stanhope and Osbourne’s full of friendship and mutual respect, the reluctant hero and hero worshipper between Stanhope and Raleigh and the older, younger, teacher-student like relationship between Osbourne and Raleigh.

It may seem strange to those that have not seen the play, but some of the most moving moments of the production came off stage, with the audience clearly imagining the terrors happening beyond the bunker when the missions finally take place, thanks to incredible audio and lighting from the sound team of Jack Goodison and Mia Hall, the lighting team of Simon Alford and Jake Holland, leading up to the most moving and powerful WWI ending, both on and off stage, since Blackadder Goes Forth, full of genuine fear and sadness.

As well as the sound and lighting teams and set design team of Tom Robbins and Jenna Ward, whose work I have also mentioned, I must also highlight the costume, hair and make-up team, including Talitha Neesham-McTiernan, for their wonderful WWI uniforms and transferring, the female cast especially, into realistic female soldiers.

I must also praise the director Laurence Hunt, producer Lewis Brand and all of the cast for bringing alive the script, which beautifully captured the era and situation through beautiful words, genuine characters, and natural humour, thought and emotion, giving the audience a real insight into life of the WWI front line.

Journey’s End is the most moving, thought-provoking and best acted performance I have seen from SUTCo and the small venue means that seats are very likely to go fast for this unmissable performance.

Journey’s End will be at Portland Works until Saturday 9th December at 7.30pm, with an additional 2.30pm matinee on the Saturday. Tickets are £7 on the door and £6 in advance from www.ticketsource.co.uk/sheffield-university-theatre-company.

The award winning Sheffield University Theatre’s Company’s perform four shows a semester. There performances for the next semester will be announced soon at www.sutco.org.

Built in 1879, Portland Works is often referred to as the birthplace of stainless steel manufacturing. It is now one of the last remaining working examples of a purpose built metal trades factory and following half-century of neglect, was purchased in 2013 by a social enterprise comprising more than 500 community shareholders who, having saved it from residential conversion, are now undertaking an extensive renovation. The grade 2 listed building has been reborn as a centre for small manufacturing, independent artists and craftspeople. For further information visit www.portlandworks.co.uk.