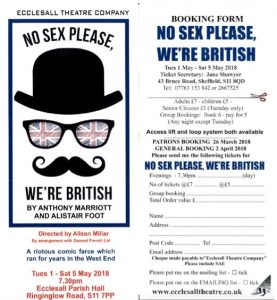 Somehow it feels right to start May with a farce, so I was delighted to be in the audience for the opening night of Ecclesall Theatre Company’s production of the classic British farce No Sex Please, We’re British, with up until now I was most aware of due to it featuring in a game of charades in another classic British comedy (answer at the bottom of the page)*.

Written by Alistair Foot and Anthony Marriott and first performed in the West End in 1971, the farce surrounds an assistant bank manager, Peter, who lives in a flat above his bank with his new bride Frances. When Frances innocently sends a mail order off for some Scandinavian glassware, what comes back is Scandinavian pornography. The two, along with the bank’s frantic chief cashier Brian Runnicles, must decide what to do with the veritable floods of pornography, photographs, books, films and eventually girls that threaten to engulf this happy couple. The matter is considerably complicated by the presence of Peter’s mother, his boss, a visiting bank inspector and a police superintendent.

Packed full of farce, innuendos and floral and non-floral slapstick this wonderful production provides a delightful evening of laugh out loud comedy, with an equally sweet and side-splitting finale, that will appeal to fans of classic 1970s British film comedy and sitcoms.

My stand out performance of the evening came from the company’s newest member Adam Diskin as the floppy haired, kipper tie wearing, gullible and panicky Brian, who not only kept getting into situations he wished he wouldn’t and will probably never sign for a delivery again, but had the best lines, comic timing and reactions of the night, not forgetting his chicken and parrot impressions.

Sweetly capturing the chemistry of young newly weds having to deal with their first growingly stressful situation were Richard Bailey Jones as the eager to please Peter Hunter (whose performance reminded me of actor Dean Lennox Kelly) and Sian Bulter-Walsh as the young wife with attitude, sharing my annoyance with door buzzers, Frances Hunter.

Perfectly capturing the overbearing, overstaying-her-welcome mother-in-law Eleanor Hunter, Sue Preston played the role with a hint of 1970s Mrs Bouquet; whilst getting a promotion in the ranks for this performance, Phil Ashton as Superintendent Paul continues to prove himself as perfectly suited to play likeable and respectable members of the constabulary. Michael Dodsworth as bank inspector Mr Needham not only perfected sleeping standing up but provided a hilarious performance reminded me of a cross between comedians Sean Lock and Greg Proops.

Other cast members I must mention include Graham Millar as Leslie Bromhead, who played the role with old world charm and authority; Philip Smith as the delivery man who captured the attitude needed for the profession if he ever fancied a new career; and Helen Bramall and Sharon Keighley as call girls Susan and Barbara played the East End roles with Liver Birds attitude and a pinch of Benny Hill girls cheek.

I must also congratulate the set, wardrobe and hair teams for capturing the psychedelic, bad taste and style of the 1970s, both in the Hunters flats and especially in the outfits of Frances and Brian; the props team for their fun props, including a painting of a certain oversized cucumber and the unwanted deliveries, and the company’s choice of classic 1970s pop music, including the likes of T Rex, which helped maintain the 1970s vibe during the interval.

The almost sell-out opening night audience confirmed that Ecclesall Theatre Company has a great, and well-deserved, reputation for brilliantly bringing classic British theatre comedy to life on the Sheffield stage.

No Sex Please, We’re British will be performed at Ecclesall Parish Hall at 7.30pm until Saturday 5 May. Tickets are £7 for adults, £5 for children with group bookings buy six tickets and only pay for five. To book visit http://sivtickets.com/event/nosexpleasewerebritish or by calling 07763 153842 or 0114 266 7525.