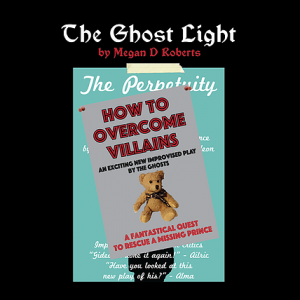 ***** I grew up in a town where the main theatre was supposedly haunted so the idea behind Sheffield University Theatre Company’s latest production of ghosts performing plays in theatres when they are closed really appeals to me.

The Ghost Light, written and directed by Megan Roberts, is based on the tradition in theatres that a light should be left on once everyone leaves so that the ghosts may perform plays of their own. The audience join the cast of ghosts as they put together their play using comedy, improvisation and some number of spoons, whilst realising that someone, somewhere is trying to get rid of these phantom thespians once and for all.

In a cast of great talent, my outstanding performances of the night came from the Samuel Ross as the frustrated and arrogant beatnik, theatre script writer, director and wannabe star Gideon, with a hint of Louis Theroux; and Kane Laurence who wonderfully performed 18th century ghost Magnus with the nobility, authority, wisdom and respect for his other ghosts that comes from being the oldest ghost in the theatre, and thanks to lighting designer Rowan Read also had some of the best entrance lighting I have seen on stage.

I must also especially mention Jenny Hart as Rose, who confirmed that this February is the month for wonderful, enthusiastic, natural, passionate and growing in confidence, great narrators at the drama studio; and whilst Martin Appleby as the Ghost Stage Manager captured the attitude and weariness of every stage manager I have previously worked with, my most likable character of the night, his Ghost Assistant Stage Manager performed delightfully with the sweetness, naivety and eagerness of a new ghost by Sabrina Lam.

A fantastic opening to SUTCo’s new season, The Ghost Light is a superbly written and directed new production, full of well developed characters performed by a wonderfully talented ensemble. Darkly funny and original, it should be seen by anyone with an interest in theatres, ghosts (or who has ever wanted to throw hundreds of spoons into the area).

Showcasing a real talent, Megan as the play’s writer and director is creative, natural and original, bringing to life  and giving a distinct voice to all of the characters and more than achieving the tough challenge of presenting plays within a play and, in the style of the likes of Mike Leigh bringing the best out of the entire cast in a script that feels often like improvised performance at its highest quality.

Not only providing a wonderful insight into theatres after hours and the spirits that inhabit them, the production also gave those of us in the audience who have no or limited experience of what is involved in bringing a production to the stage a delightful insight and left me sure that if I ever return to working in a performance venue I will always leave a light on at the end of my shift, whilst also confirming that humans are the enemy not only in the natural but in the supernatural world.

The Ghost Light will be performed at Sheffield University Drama Studio until Saturday 23 February at 7.30pm. Tickets are £6 in advance and £7 on the door. To book visit www.sutco.org/the-ghost-light.

The award winning SUTCo perform four shows a semester. There forthcoming shows are And Then There Were None from 6 to 9 March at Sheffield University Drama Studio; Gardening in Small Spaces from 20 to 23 March at a venue TBC; and Anatomy of Gray from 1 to 4 May at Sheffield University Drama Studio. For further information and to book visit www.sutco.org.

P.S. My advice to audience members is to take your seats in the theatre at least 15 minutes before the show starts to see Tayla Adams pre-theatre rehearsal and theatrical musings and, especially in the second act, to keep an eye out on what is happening at the back and side of the stage, especially where the cuddly teddy bear (who deserves its very own credit) is involved.