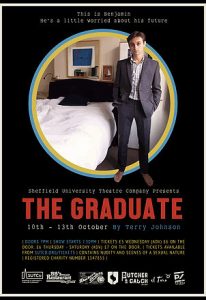 ***** I own the soundtrack on vinyl and have read the book about the making of the film but have never in fact seen The Graduate, so was delighted to be in the audience for The Graduate, the first show of Sheffield University Theatre Company’s 2018 autumn season.

The Graduate, based on the award winning 1967 film starring Dustin Hoffman takes a comedic spin on the classic love triangle story, whilst also remaining incredibly poignant. Written by Terry Johnson, it tells the story of Benjamin Braddock, who has just finished college and, back at his parents’ house, is trying to avoid the one question everyone keeps asking: What does he want to do with his life? When the elusive Mrs Robinson, a friend of the family, seduces Benjamin at his graduation party, he becomes wrapped up in a tale of deceit and lies. But what begins as mere fun turns complicated when Benjamin falls for the one woman Mrs. Robinson demanded he stay away from, her daughter.

There were superb performances from all of the cast in this production, beautifully capturing the American accents, attitudes and essences of their characters, the constraints of late 1960s America, dependent on their role either giving incredible performances beyond on their years or capturing the difficulty and rebellion of youth.

The chemistry between the three main leads was fantastic thoughout, whether the sexual between Cerys Hayes as Mrs Robinson and Wilf Walsworth as Benjamin, the young love between Wilf and Lucy Bytheway as Elaine or the bad mother daughter relationship between Cerys and Lucy.

Whilst Wilf perfectly captured the naivety, awkwardness, charm and selfishness of youth and working out your way in life, getting to deliver  one of the greatest lines in popular culture “Mrs Robinson, are you trying to seduce me”; Lucy perfectly balanced the attitude of youth and her failed attempts to hide her vulnerability and need to be loved whilst escaping an unhappy home life; and Cerys perfected the seduction skills alongside bringing to life the older woman who is desperately trying to escape the trap of her unhappy marriage and parenthood through alcohol and the reassurance of being desired, or as the woman behind me in the audience uttered during the interval “does cougar very well”.

Other cast members who deserve a mention include Nathan Sloane and Meredith Graham as Benjamin’s all American parents Mr and Mrs Braddock, right down to the white picket fence, desperately trying to both protect, and understand, their son whilst maintaining their reputation amongst their friends; Matthew Bevan as Mr Robinson, whose stage presence and talent to get to the heart of every character he plays, bringing them, their emotions and passions to life before audience’s eyes continues in this role and almost convinces me to get into “plastics”; and not forgetting Harry Carling who brought to life multiple roles so successfully throughout the show that you forget they are all being played by the same person.

From the production team, I must particularly praise George Evans, winner of our “One to Watch in 2018 and Beyond” award at our 2017 awards, who proved he is just as talented off stage as on, with direction that cleverly, stylishly and beautifully brought the classic film alive on stage.

Amongst the backstage team I must highlight the work of lighting designers Jonathan Payne and Megan Roberts and lighting operator Callum Booth for their classic, almost film noir lighting arrangements that were at their best during the opening scene where the combination of the back screening and lighting to show the classic 1960s cocktail party poses also stunningly captured the feeling of the rest of the world both continuing without you whilst also somehow not mattering in your life at all; and Katie Kelson and Kate Alhadeff in costume, hair and make-up for beautifully capturing the look of the era, including Elaine’s iconic wedding dress.

Of course you cannot discuss The Graduate without mentioning the music of Simon and Garfunkel and this production’s clever use of their classic soundtrack throughout, not only took the audience straight back to the era, introducing the younger members of the audience to the classic sounds, but provided the perfect scene change accompaniment, reflecting the atmosphere of the story.

Leaving me never looking at Cheerios in the same way again, this production is one of the best theatre adaptions I have seen, both proving why the film itself was nominated for seven Oscars and I imagine impressing Dustin Hoffman and everyone involved in the film if they found themselves in the audience. Based on the audience, it also appeals to the widest group of range of ages I have seen in the audience for a SUTCo production, from those who loved the original film at the time and were appreciating the rare opportunity to see it performed live on stage to young people new to the greatest and most tragic stories of seduction and coming to age ever told.

This production continues to confirm SUTCo’s place as one of the best student, if not overall, dramatic societies in Sheffield and beyond and if this excellent adaption and season opener is a sign of what is to come, then the rest of their 2018/19 season is essential watching as the company and its individual cast and crew cement themselves as ones not to miss at the start of what should be long and successful careers in dramatic theatre.

The Graduate will be performed at Sheffield University Drama Studio at 7.30pm until Saturday 13 October. Tickets are £5 in advance from www.sutco.org/tickets and £7 on the door.