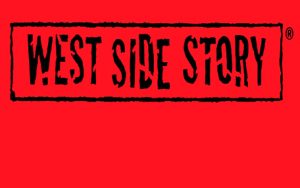 ***** Considered one of the best musicals of all time, I was delighted to be in the audience for Splinters Theatre Group’s performance of West Side Story on at the Montgomery Theatre, Sheffield until 23 September.

Inspired by Romeo and Juliet, West Side Story is set in 1950s New York and explores the rivalry between the Jets and the Sharks and what happens when Tony, a former member of the Jets and best friend of the gang’s leader falls in love with Maria, the sister of the leader of the Sharks.

I am loving the recent trend for the action on stage starting as the audience enters the theatre, as this show is no exception, with three of the Jets playing with a basketball on stage as the audience took their seats, which smoothly led on to the opening scene which quickly established the friendliness within and rivalry between the two gangs, their style and coolness and established the sharp jazz/contemporary/ballet style choreography and fight and acrobatic skills to come, without the characters needing to say a word for the opening minutes.

“Jet Song” was the perfect showcase for Josh Holliday (Riff’s) pure American jazz voice accompanied by the incredible harmonies of the rest of Jets, whilst “Something’s Coming” and “Maria” perfectly displayed the full fabulous range of Adam Walker (Tony’s) voice and his amazing stage presence, making you consider changing your name to Maria so he could sing about you.

The scene at the dance was full of fabulous suits and dresses and a stunning mambo routine that made you want to get up and dance and almost miss Tony and Maria (Grace Hadabora) meeting for the first time until they are centre stage and the dancers around them disappear as the change of tempo reflects the instant romantic spark between them before their innocent and natural first kiss is abruptly interrupted.

Grace displayed in the “Balcony Scene” and later in “I Feel Pretty” that she possesses a beautiful Julie Andrews  (if she was Puerto Rican) Rogers & Hammerstein worthy voice that complimented Adam’s voice beautifully, as well as smoothly hitting some unexpected high notes. The Shark Girls performance of “America” proved beyond a doubt why it is one of my favourite musical numbers of all time, full of comedy, friendship and fabulous singing and dancing brilliantly capturing the Puero Rican spirit. “Cool” performed by the Jet boys was the ultimate lesson in coolness with Josh’s vocals as crisp as the jazz style choreography and legendary clicks.

“One Hand, One Heart” made you forget you were at a show, transporting you to instead witnessing a beautiful wedding, between a young sweethearts who couldn’t be more in love, with beautifully sung vows not out of place in a cathedral. The last song before the tragic ending of Act One, “Tonight” wonderfully showcased the voices, attitudes and positions of all of the characters, including the best musical arrangements of the night, ending with the power of the 39 strong cast all singing at once.

The dream like, all in white “Somewhere” ballet sequence, was mesmerising accompanied by the beautiful voices of  Lowri Anderson and Jennifer Horsfield (their parts far deserve to be listed as more than just “Girls). In contrast, before that tragic ending that made the audience both jump and cry, “Gee Officer Krupke” provided light hearted relief and the comedy break needed, showcasing the singing, acting and slapstick skills of the Jet guys and their hilarious comic timing and impressions of Officer Krupke. Millie Scott (Anita) sung “A Boy Like That” with deep emotion, passion and maturity beyond her age before the song smoothly moved into Grace’s “I Have A Love” that could not have been sung more from the heart and between them provided the best vocal performance of an entire show full of amazing vocal performances.

Adam and the very beautiful Grace both possess natural stage presence and vocal talent, emotional depth and amazing chemistry that will see them go far; and Millie Scott plays Anita fabulously with a sexy, sassy talent, maturity beyond her years, even greater emotional depth and the passionate relationship between her and Bernardo (Jack Skelton) shines through.

In an incredible cast, other characters who highly deserve a mention include Niamh Ingle as Anybodys, who plays the role with an attitude all girls who want to get far in a man’s role should learn from; Tom Ferris as Baby John who perfectly displays the feelings of any kid who wishes they were older or at least treated that way alongside great comic timing; John Crowther as Officer Krupke, who plays the role with just the right amount of Top Cat’s Officer Dibble; and Danni Smith as Rosalia who brilliantly captured the dumb but loveable brunette who misses her home country.

Brilliantly casted and with flawless direction, choreography, acting, accents and vocals throughout, I could not imagine a greater stage production of West Side Story. I must also praise the costumes and hair teams, who despite a large cast, perfectly captured both the era and the differences between the two gangs, and set, props and lighting who perfectly captured the scenes whilst keeping the emphasis on the characters. Last but not least I cannot miss out the full orchestra who gloriously captured each note of the iconic score and atmosphere of the show.

West Side Story is on every day at 7.15pm until Saturday 23 September, with an additional 2.15pm matinee on the Saturday, at the Montgomery Theatre. Tickets are £15 and are available online at www.sheffieldtheatres.co.uk/whats-on/the-montgomery-west-side-story/dates, on 0114 249 6000 or in person at the Crucible Theatre box office.

P.S. The programme the audience to #PickaWestSide (#TeamJets or #TeamSharks). I’m definitely #TeamShark for the fabulous passion, attitude and exoticness.