Six shows you must see at Edinburgh Fringe 2018 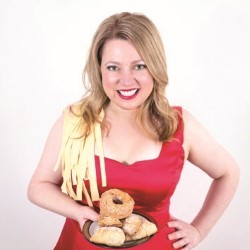 After a day out of Edinburgh touring whisky distillers, the thought of a show that combined the three Cs of cabaret, cooking and comfort food was always going to appeal.

In Comfort Food Cabaret, Australia’s singing cook Michelle Pearson presented her award-winning musical food cabaret in its UK debut. The audience were promised to be serenaded by the soulful songstress, accompanied by maestro Aaron Nash, as she cooks a comfort-food inspired three-course meal before their eyes, with the opportunity to taste each dish.

Leave extra time to enjoy Michelle’s three comforting homemade courses cooked and served to you accompanied by her wonderfully funny and moving true stories, true passion for food and stunning and versatile voice. Michelle’s take on Amy Winehouse’s “Back to Black” as well as her truly yummy desert will stay with me for a long time and all I want now is for her to bring out a cookbook and accompanying soundtrack.

Comfort Food Cabaret is on until Sunday 26 August (no show on Sunday 19, Monday 20 or Tuesday 21 August) at 7pm and 9.30pm (7pm only on Wednesday 22 and Thursday 23 August) at C Venues – C At new Town Cookery School – Cabaret Kitchen. For further information visit https://tickets.edfringe.com/whats-on/comfort-food-cabaret. 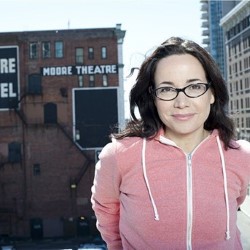 Janeane Garofalo – Put A Pin In It

Starring in some of my favourite 90s film comedies, including The Truth About Cats And Dogs, Romy and Michelle’s High School Reunion and Mystery Men, I wasn’t going to miss a rare chance to see American actress and comedian Janeane Garofalo perform stand-up.

From the moment Janeane’s show began I knew I could listen to her for hours, even though she happily admitted to not being a natural comedian. Her clever random thoughts and ability never to actually finish a story gave the audience a hilarious and delightful insight into the workings of her mind and made you love her all the more for it.

Janeane Garofalo will be performing Put A Pin In it until Sunday 19 August at 9.15pm at Gilded Balloon Teviot – Wine Bar. For further information visit https://tickets.edfringe.com/whats-on/janeane-garofalo-put-a-pin-in-that. 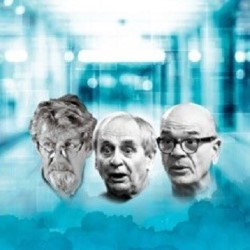 Sylvester McCoy, Robert Picardo (Star Trek Voyager, Stargate Atlantis) and John Bett (Shallow Grave, Tess) star in Dan Freeman’s A Joke, which promised to explore the audience’s attitudes to humour and life. An Englishman, an Irishman and a Scotsman find themselves in a void and must work out who and where they are. Are they constituents of a story, or is the joke on them? They approach the world respectively with fear, optimism and acceptance and gradually begin to solve the mystery of their own existence and the audience’s.

During a festival full of jokes, this wonderfully written and directed play is a clever and hilarious analysis of what makes a good joke set in a joke content’s equivalent of heaven, that’s plays perfectly on the strength’s of the three actors, including Sylvester’s essential spoons, and the chemistry between them. A must to see whether you are a fan of one or all of the cast, theatre or simply the art of comedy.

A Joke is on until Sunday 26 August (no show on Tuesday 21 August) at 4.25pm at Assembly Rooms – Ballroom. For further information visit https://tickets.edfringe.com/whats-on/joke 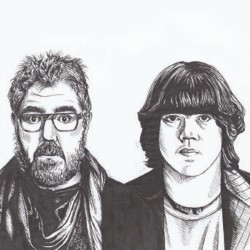 I am a massive fan of Phill Jupitus, having seen him perform twice at the Fringe previously and still missing Never Mind The Buzzcocks, so I wasn’t going to miss this opportunity to see him for a third time.

Freeviously is a revival of his 2018 show, Up The Stand, which promised to include a song about owls being bastards, a Coldplay parody, the chips cheese and curry sauce bit, and the bit about Puffins which is now more elaborate as Phil has been doing it on tour.

Part of the Free Fringe, where at the end of the gig you donate what you can, this show reminded me why Phill is one of my favourite ever comedians but a lovely guy (even moving in extra chairs himself for audience members) as well as a naturally gifted and hilarious storyteller, who even made his own self laugh out loud on several occasions. After moving north of the border last year, this gig proved that England’s loss is definitely Scotland’s gain and will never make me think of puffins in the same way again.

Phil Jupitus will be performing Freeviously until Sunday 26 August at 12.30pm at Bannermans – Back Cave. For further information visit https://tickets.edfringe.com/whats-on/phill-jupitus-freeviously. 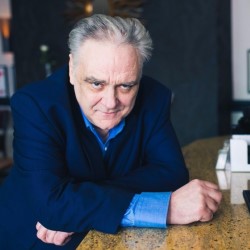 Tony Slattery – Slattery Will Get You No Where

With my love of live comedy and improv coming from Whose Line Is It Anyway on channel 4 in the early 1990s, I couldn’t miss the opportunity to see a member of the show’s original line-up perform live, in fact Tony Slattery’s was the very first show we booked for at this year’s Fringe.

As expected from this king of improvisation, Slattery Will Get You No Where (possibly my favourite ever title for a Fringe show) promised to be an unstructured and unpredictable gallop through several lifetimes’ worth of poignant and hilarious anecdotes, in which anything can happen, and it probably will….

I rightly agree with the national newspaper that put this show in the top seven shows to see at the festival. With Tony being interviewed by Robin Ince, this show is honest, genuine and full of moving emotional and laugh-out-loud moments, this is an opportunity to discover the real Tony. I wish I could be in the audience for it every day, as every day promises to be different and more insightful and hilarious. Plus you can have the pleasure of meeting Tony afterwards, if only so we can all remind him that he is a heart throb.

Tony Slattery will be performing Slattery Will Get You Nowhere until Sunday 26 August at 1.15pm at The Stand’s New Town Theatre – Lower Hall. For further information visit https://tickets.edfringe.com/whats-on/tony-slattery-slattery-will-get-you-nowhere. 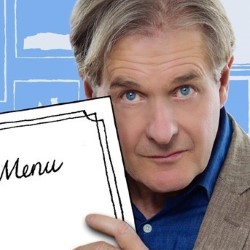 The Song of Lunch

I am a massive fan of the ITV drama Cold Feet, not only owning all the DVD box-sets, but the novel and cast autographs as well, so was not going to miss seeing Robert Bathurst perform at the festival.

Robert Bathurst stars alongside Rebecca Johnson in this hilarious and poignant drama of a disastrous attempt to rekindle lost love. Set in a Soho Italian restaurant, Costa Award winner Christopher Reid’s verse comedy is intertwined with animations by Charles Peattie.

Beautifully told and performed and cleverly directed and choreographed against a hand drawn animated background, Robert’s acting talent shone through in both vocally and physically in his real and inner monologues and with wonderfully chemistry with Rebecca, that truly made the audience believe they were witnessing their reunion.

P.S. If you find yourself sitting at the far right end of the front row be ready for Robert to get very up close and personal with you.

The Song of Lunch is on until Monday 27 August at 2.20pm at Pleasance Courtyard – Forth. For further information visit https://tickets.edfringe.com/whats-on/song-of-lunch.

With around 4,000 shows at the Fringe alone, excluding the other festivals taking place in Edinburgh at the same time, there’s no way we could see everything we wanted to, so here are our recommendations for other shows at the Fringe: